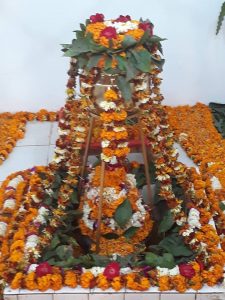 The fourth day of Krishna part of every month is called ‘Shivratri’ but the same day in the month of Falgun has its great importance and it is worshipped as Shivratri. Maha-shivratri is one of the main festivals for Hindus. This day is dedicated to Lord Shiva.

According to Hindu beliefs, at the beginning of creation, on the same day, the incarnation of Lord Shiva from formless to structured form happened in the midnight in Rudra form. This night of incarnation is worshiped as MahaShivratri. On the same day, Lord Shiva ends the whole universe with the fire of his third eye.There is one more belief that Lord Shiva got married with Parvati-Daughter of Hiamalaya on the same day.

According to Shiva Purana, devotees of Shiva who perform Shivratri fast, get great virtue, along with enjoyment in life and salvation both.

During Mahashivratri, performing fast, Ratri Jagaran, and worshipping Shiva-Ling and Rudrabhishek with Bel-patra have special significance. Performing Rudrabhishek on this day cures both disease and pain. Shiva teaches his devotees the importance of restraint in life from night jagaran and fasting.

The significance of Shiva Ratri Fast: According to beliefs, if a person performs the fast of Shiva-ratri unknowingly, then he/she will attain the highest virtue and happiness. The tradition of Shiva Ratri fast is very old. Brahma and Vishnu also worshiped Shiva at Shivratri.

One day before Shivratri, i.e. on the date of Triadashi, is the provision of worshipping Lord Shiva which also includes taking resolution for the fast. By remaining without food in the fast, Lord Shiva is very pleased by offering Bel leaf and Panchamrita (water, milk, curd, honey, sugar) on Shivling. You should worship Lord Shiva round the clock and do charity to Brahmins and saints, next morning. You should do fast according to the time in Panchang calendar. By following this method of fast one can attain special blessings of Lord Shiva by doing all three holy methods i.e. Jagran, worshipping and fast.If you are incapable of following this kind of fast method, then do fast all day and worship Lord Shiva in the evening and accomplish your fast. You can also attain happiness in life with the blessings of Lord Shiva by following this method.

In ancient times, there was a very evil and merciless hunter named Gurudruh. His routine task was to hunt animals and feed his family. He did not know the difference between sins and virtuous deeds. Killing animals and people or rob people was an easy task for him.

Once day, on Shivratri his family had nothing left to eat. Seeing the hunger of his wife and children, Gurudruhu went out in the forest to hunt. He had to wander in the jungle, due to lack of prey, till the evening. There was a waterfall and a Bel tree on the side of that waterfall, and also a Shiva Linga which was covered with leaves. Unaware of Shiva Linga, Gurudrahu climbed to the Bel tree, along with the bow arrow and a water pot.

At sunset, one doe came to drink water at the waterfall. On seeing doe, Gurudrahu set an arrow to his bow, causing the tree to shake and some of the Bel leaves fell on Shivlinga. Due to the movement, some drops of water also fell on Shivling. In this way, Gurudrahu unknowingly worshiped the Lord Shiva on Shivratri without eaten anything.

On the other side, Doe on being targeted by Gurudrahu’s arrow, asked for protection of his life, and begged him to let her go home and meet her husband and children. Gurdrahu heard his request and ordered her to return immediately. After some time another doe came. The hunter pointed arrow again and once again Shiva Linga was anointed with Bel leaves and water. This time also doe started praying for meeting with his children and husband. Gurdaruha also let her go.

Sitting on the tree, Gurdrahu was now waiting for the two of them. Suddenly he saw that both the does were coming near him with their husband and children. Both of these deer were sisters and were married to the same deer. Deer started praying for Gurudrahu to leave his wives. He himself was ready to die, but the killing of his children and wives was not acceptable to the deer. Hearing this, Does also started asking the hunter to leave her husband.

Upon hearing this, the children of the deer also started crying and begun to request Gurudrahu not to kill their parents. They were ready to die instead of their parents. Seeing all this, Gurudrahu was confused. Seeing their goodwill, his heart melted. He began to descend from the tree. Again, the Shiva Linga was anointed with Bel leaves and water and the fast for Shiva Ratri was accomplished. Coming to the ground from the tree compassion grew in the heart of the hunter by the grace of Lord Shiva. Mercy is the root of religion. Gurdrahu gave life to the Deer family and freed them from fear, which deleted all his sins.

Lord Shiva was pleased with this unknowingly simple and natural puja and when he appeared, he said to the gurudruha: “O gurudruha, you have shown compassion on innocent and harmless creatures and have pleaded me by worshipping. So I am freeing you from all the sins you have done. “By the grace of Shiva all evil thoughts disappeared from the mind of the gurudruha and he started living a holy and perfect life.